What would be a church "flywheel"?

I recently attended a workshop with Dr. Darrell Guder where we discussed three functions of church: Gather, Upbuild, Send.

In my church context, these are based on John 15 “abide in me”, 13 “love one another”, and 17 “go into the world”. My pastor @jamesb also likes to say that we are “externally focused, internally alive, and eternally connected”.

In the workshop, we initially talked about these in a linear fashion:

But coming from my Amazon background, I noticed that they form a flywheel: 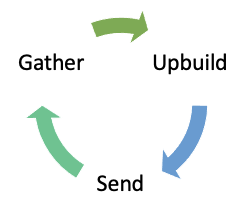 In business, the flywheel concept refers to a process where any effort you put into any part of the flywheel increases the momentum of the whole. For Amazon, this means growth, HubSpot does something similar. It got me thinking, What would be a Church flywheel? What would be at the center?

There are many candidates like glorifying God, spreading the gospel, or making disciples, but when I view Scripture as a testimony to God’s promise and purpose in the world, I’m inclined to put “Scripture Fulfilled” at the center. 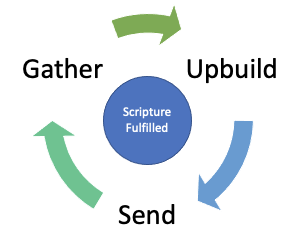 Scripture promises a New Creation and an inheritance in God’s Kingdom, along with suffering, trials and sacrifices.

Every time believers in Jesus gather to worship, build up one another and are sent out by Christ into the world, Creation inches one step closer to the fulfillment of all things. This would include the ingathering of all of Jesus’ flock, including people from every language, tribe and nation. This would include the Church reaching full maturity.

By putting Scripture at the center we don’t have an open-ended mission, but rather a faithful witness and “telos” that all of our worshiping communities are moving towards.

If we view the flywheel as if it were the head of a screw, our weekly rhythm of churches gathering, upbuilding and sending is like turning each screw deeper and deeper until it is fully secure as another part of the complete spiritual superstructure that the Holy Spirit is building as a house for God.

Although my analogy is imperfect, I think it is helpful for thinking about how digital technology can holistically support churches in fulfilling these functions from first principles rather than just adapting the “sage on a stage with a camera in the back of the room to livestream” model to a virtual environment.

How can technology support gathering?

One person in the workshop said, “We aren’t fully gathered until all are gathered”.

Many church communities can be plagued with cliquishness. Everyone already has their pocket of friends and new people feel excluded. Many churches also have trouble reaching people inter-generationally, cross-culturally, or cross-lingually.

Tech must go hand in hand with culture (how people use things and what they use them for), but one way it can help is by reducing the friction to forming new relationships and giving everyone access to the gathering.

How can technology support upbuilding?

Dr. Guder mentioned in the workshop, “The New Testament equips followers of Jesus for rejection and tension in the world…Christians reporting from the mission field, equipping one another.”

He highlighted the significance of the Greek word allelon, which is translated as the phrase “one another”. There are many “one another” commands, but to use as an example “bear one another’s burdens”, we learned that online anonymity has resulted in younger generations openly sharing their struggles much sooner than when they have to show up in person.

Digital churches probably would want to have a mix of anonymous and non-anonymous gatherings to support the full range of human experience and personality.

How can technology support sending?

Churches have long struggled with the sacred/secular divide where people disconnect their Sunday faith from life all the other days of the week. Church physical spaces can be a reminder of God’s presence, but can also feel remote when you’re not there. Virtual spaces on the other hand (along with the relationships and experiences they represent) can be ever present.

Something as simple as having Scripture readily accessible on a person’s desktop side-by-side with their work Zoom calls or an ongoing group text with other believers can sustain an ongoing sense of God’s presence as people are sent into their vocations throughout the week.

Where does the flywheel aspect come in?

In business, a flywheel is traditionally associated with accelerating growth. By putting “Scripture Fulfilled” in the center, we might not expect exponential growth of a particular church gathering, but we might expect the acceleration of Scripture being fulfilled where the testimony of the Gospel reaches all peoples and the Church grows up to maturity in Christ faster and faster.

Of course, all of this depends on the Holy Spirit. By aligning our efforts with what the Spirit is doing in and through the Church, I hope we can all benefit from the transformation God is leading us through.

PS, would love your thoughts on a “church flywheel” and how digital might accelerate any part of it. My ideas are still not fully formed, but I wanted to put the analogy out there as a conversation starter!

Dr. Guder had this to say about the original post (in the context of my church

I am very grateful for Chris’s excellent exposition of the “ecclesiastical triad”: calling/gathering – upbuilding – sending and for his emphasis on scripture as the “flywheel force” moving the church forward in mission.

It opens up the discussion for myriad implications for the life and action of the church. In the ongoing “Gospel and our culture” conversation, the focus upon reading the Scripture missionally – that is, as the divine instrument for the continuing formation of the gathered community for its vocation as witness in the world – is expanding constructively.

Theologically, this discussion is pursued as “missional hermeneutics.” It is largely rooted in Karl Barth’s ecclesiology who brings his entire exposition together under the rubric, “The vocation of the Christian is witness.” That witness happens in the process of gathering, upbuilding, and sending.

As Chris’ paper shows, these three emphases shape and interact with each other. Sending results in calling/gathering. How we upbuild/prepare the community is a visible witness to the Gospel that the world can experience.

This is the conviction that gets expressed in the basic formation question: How did this text continue the formation of a faithfully witnessing commuity/believer then, and how does it do so today?